So, last entry was about the gems from Smaugs hoard. A mounting that turned out different than I had initially thought it would. Today will be about the Saw II syringe.


This also ended up being mounted in a different way than I had first planned.
The original plan was to simply place it inside a ordinary deep frame with a picture of the cover from the movie, like I did with the Starship Troopers pin. I even went as far as buying the frame I was going to use. This probably would have worked well enough, but it might have been a little bit boring as I already have one such mounting.
It was while I was just doing some browsing in the Reject Shop for something completely unrelated (I forget what) that I noticed that they had increased their selection of frames.
Lately I find that I automatically look for frames, display cases or anything else that can be used to display props in an eye-catching or pleasing way where ever I am...
So, I found this:
A shadow frame with four slots in it. A thought started to form that with this I could have not only the syringe with a background picture, but also something from the movie as well and make it look slightly more like the fancy displays I've seen, albeit f course not quite as professional.

With the frame in house I go to work. The first thing was to find the proper pictures to put in the boxes. This was not as simple as I had imagined. My problem was that the shadow-frame only had the boxes in portrait format. No problem for the cover picture, which is originally in this format. However, I wanted to include a picture from the needle pit scene, and initially all the pictures I could find were in landscape format. It took some Googleing, but I did eventually find one picture standing the right way (for copyright reasons I will not show the pic here, if you want, Google it). I also found some high quality cover pictures, of which I chose two. The last frame I filled with a scaled down copy of the background story letter that Reel Art were kind enough go enclose with the syringe.

The picture chosen it was time for placement. I took the frame apart and laid the pictures and syringe next to each other and experimented a little bit until I felt happy with the arrangement.

When I was happy with the order of the pictures the next problem the centering of them inside the frames. I had hoped that the inside paper would have the frames marked for reference but here I was disappointed. It looked like I was in for 4X meticulous measuring and marking.

I don't like measuring like this, for the simple reason that I'm not that good at it, which makes it a painstaking process for me. the thought of doing it four times, with possibly four different results and hence a bad display did not please me. I therefore sat down and tried to find an easier way. After a little while it struck me. Why not just try to fasten the pictures directly on the inside boxes?
I use Blue-tac to fasten many of my props for the simple reason that it holds well enough for my purposes and it will mold around an object to hold it from several angles at once. It is also not permanent, which gives me the possibility to try several times to get the right placement. Finally, it also does not damage the prop when I use small enough pieces of Blue-tac. 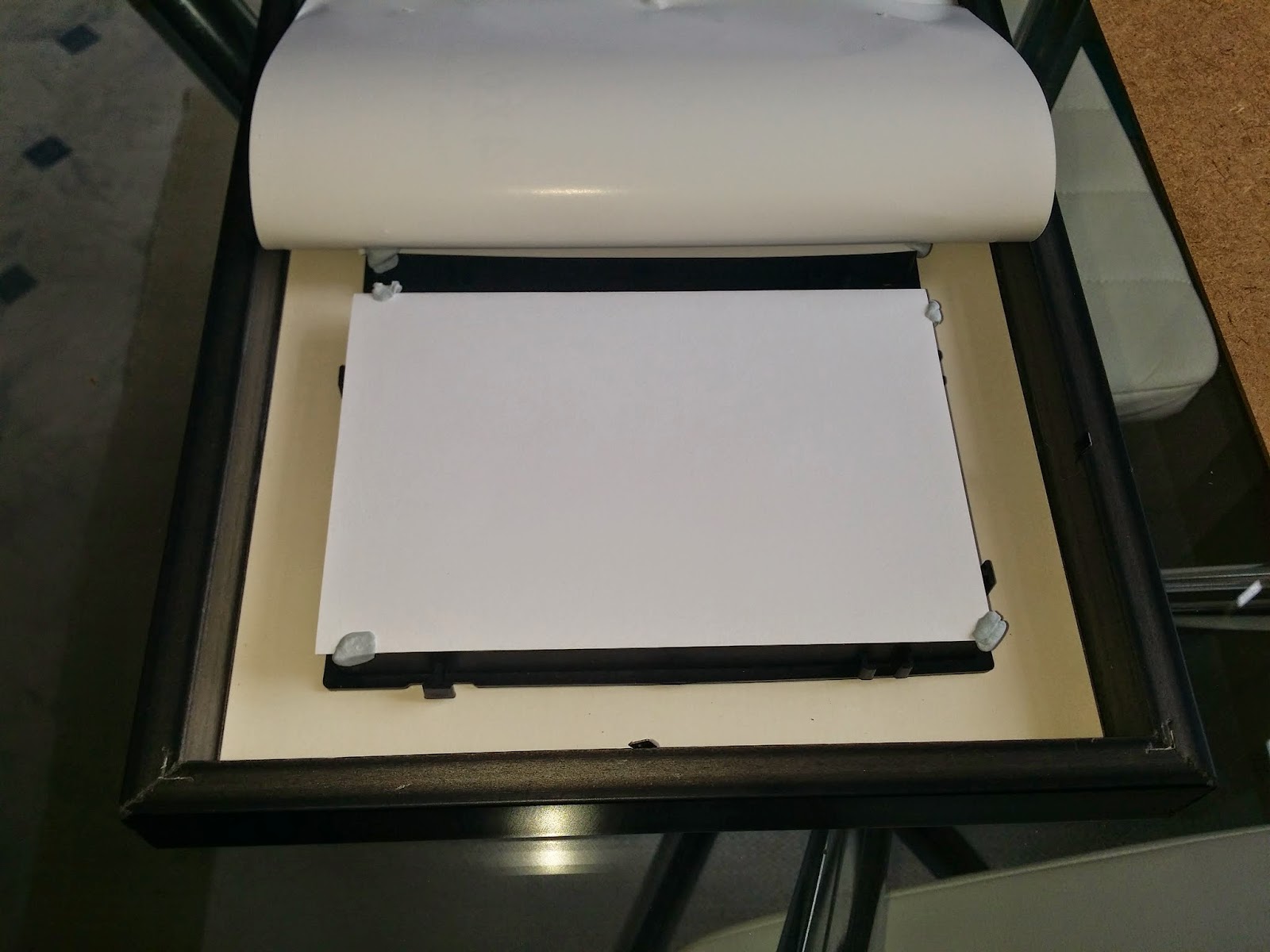 So, I fastened the syringe on the front of the picture I wished to use as the background for it and then placed all the pictures face down on the top of the inside frames. I then Blue-teced them to hhe outsides of the frames so the Blue-tac would not show. After that I put small pieces of Blue-tac on the back of the pictures to fasten them to the background paper.

After that I remembered that I had not yet put on the plaque describing the prop that I try to put on all my props. (I haven't found out how to do this with my gems from The Desolation of Smaug, due to the fact that I have no excess area to place it on the model, but I'm working on it...).This meant taking off the background paper and removing the white cardboard with the frames and the pictures and syringe as well fastened to it.
So, it turned out that I wouldn't get out of measuring after all...

A quick word on the plaques; I like to put them on because I think that it gives the finished mount a more professional and museum like feel to it, and they are actually not hard to get. Key-cutting places I have found often do plaques as well, and have a variety of different designs and fonts to choose from. I like my local Mister Minit, simply for the fact that they are reasonably priced and more importantly, they have great and very friendly staff here where I live.

I measured out the center-point on the bottom of the frame between the second and third picture and glued the plaque on. The ones form Mister Minit comes with glue on the back, so you simply stick it on where you want it. However, be certain before you fasten it as it is permanent glue and once it's on it's not coming off again...

Having done the plaque I was finally finished. I placed the whole thing inside the outher frame, fastened the back and voila:

To be completely honest, I am actually quite pleased with the finished product. I love how all the pictures come together and tell the story of the prop. I also find the whole thing esthetically pleasing.
This is what it is about for me, collecting props. The process of finding the prop, buying it, waiting for it to arrive, finding a good way to display it and getting a great thing to hang on my wall.

So, that was the story of the Saw II syringe. A bit long, but I hope that I didn't bore you too much and thank you for following me.

Until next time, have a great day.
Vinnjar
Posted by Unknown at 20:40

Sites related to props and movies